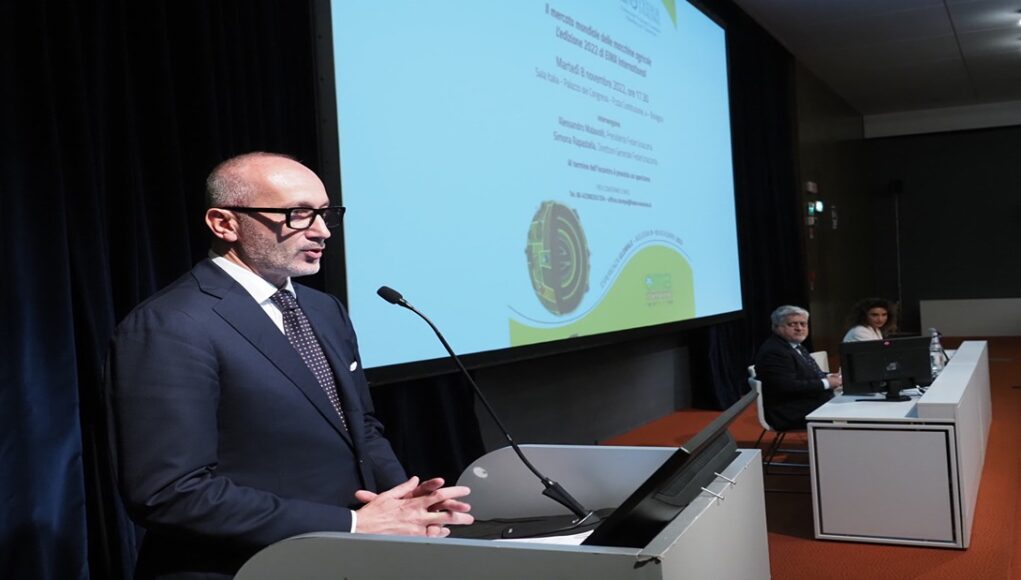 FederUnacoma (Italian Manufacturers’ Federation)’s forecasts for the end of the year indicate a drop in the quantity produced (-6%), but an increase in the value of production (14.2 billion euros, amounting to +3.7% over 2021). The resilience of the domestic market and above all the good performance of exports (+10.4% in July) support the sector, which is nevertheless suffering from the crisis in production costs and the lower agricultural incomes. These statistics were revealed during the EIMA International 2022 Press Briefing in Bologna, Italy on 8 November 2022.

According to the FederUnacoma, the resilience of the domestic market and good demand from foreign markets kept the Italian agricultural machinery industry at good production levels, confirming its leading role on the sector’s international landscape. Registrations on the domestic market remained at good levels – lower than in the record year 2021 but higher than the average of previous years – and exports continue to be the strong point of the Italian industry.

ISTAT data on foreign trade in the seven months of January-July show a growth in exports in value for both tractors (+2.13% compared to the same period in 2021, albeit against a drop in the number of units of 20%) and other types of machinery (+13.6% in value and +0.34 in weight). In the first seven months of the year, the Italian agro-mechanical exports achieved total growth, in value, of 10.4%, against a reduction in quantity of just 2.5%. The main outlet markets are confirmed to be the United States, France and Germany, but exports to Poland (+26%), Romania (+37%) and Hungary (+46%) are growing. The increase in turnover, even in the presence of a reduction in exported quantities, can be attributed to the increase in list prices, a discrepancy that should also characterise the year-end final balance of Italian production, which is estimated to fall by 6% in terms of quantity, but rise in terms of turnover, reaching 14.2 billion euros, a better result than that of the record year 2021, which had recorded a production value of 13.7 billion euros, an increase of 3.7% over the previous year.

The expected turnover for the end of 2022 is affected by the good performance of the green maintenance segment, with production levels in line with last year’s at around EUR 1 billion, and especially that of components, which is estimated to reach a turnover of EUR 3.4 billion by the end of the year. “However responsive and effective it may be, the Italian industry is not exempt from the unfavourable economic situation and all those factors that affect companies in this difficult phase. In the spring of this year, the price of energy rose dramatically, marking an increase of 400% compared to spring 2020. The energy supply crisis is particularly heavy in Europe, where as a consequence of the Russian-Ukrainian conflict, a real ‘gas war’ has taken place, pitting Russia against the European Union. The initiatives taken by governments and by the European Union as a whole to diversify supplies and to calm prices are well known,” said Alessandro Malavolti, President of the Italian Manufacturers’ Federation (FederUnacoma).

He further explained that these interventions have begun to produce their effects (a 10% drop in prices since September and the prospect of further decreases in the coming months), but they are not sufficient to bring prices back to the levels of the last twenty years, and with permanent effects on the accounts of manufacturing companies, which contribute to an increase in production costs and thus to an increase in the list prices of mechanical equipment. Unfortunately, this is combined with an increase in production costs also in farms, which suffer from higher energy bills, but also from the increased burden of purchasing fertilisers and chemicals. Fertiliser prices have risen unpredictably since last spring due to the import blockade from Russia, which with 16 million tonnes of fertiliser was by far the largest supplier to the European Union. In June this year, chemicals recorded increases of between 100% and 150% compared to June 2020, the largest since 2000. Even if they fall in these months, the prices of chemicals (which include the whole range of specific agricultural treatment chemicals) are set to remain at significantly higher levels than pre-Covid. “In order to reduce the widening gap between industrial costs and the investment capacity of farms – said President Malavolti – public support, aimed at encouraging purchases, both at the national and European level, with a range of specific tools for agricultural mechanisation, is essential.